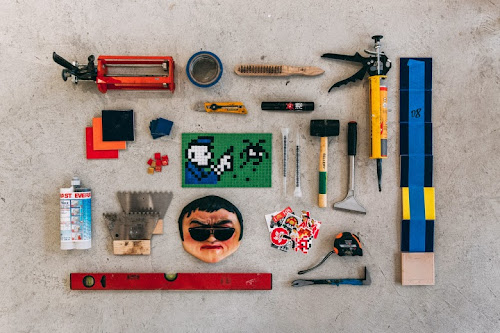 For our latest installment of Essentials, we take a look at some of the must-have work tools that street artist Invader has at his disposal day in and day out. A graduate of one of France’s top art schools École des Beaux-Art, his early works drew inspiration from popular 8-bit video games from the late 1970s to 1980s, most notably the characters from Space Invaders which is also where his pseudonym derives from. The inherent pixellated nature of these games is present throughout Invader’s mosaics, where the combination of contrasting tiles best depicts the throwback motifs in an eye-catching and distinct manner. After carefully arranging the tiles with tape, the French artist utilizes a metal scraper, nail remover and brush to prep his tagging surface, before attaching it as a whole, or piece by piece, with super glue or cement. A steel block hammer is used to ensure that all the tiles are put into place properly. Other essentials Invader presents include a Bruce Lee mask to hide his identity during working hours, customized ”Wipe Out” stickers pertaining to his most recent showing at Hong Kong The Qube, and a mosaic of a Policeman pointing at an Invader figure, which is a reference to the numerous rampages that have occurred where the Hong Kong police took down a slew of his work throughout the years leading up to his debut show in the city. Check out Invader’s Essentials above and head over to his official website to see more of his world-spanning installations.