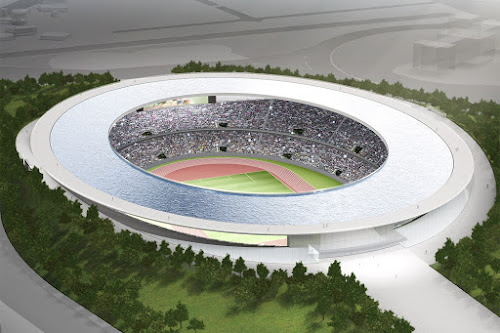 Originally opened back in 1964 for the Summer Olympic Games in Tokyo, Shinjuku’s National Stadium will be replaced with a brand new design from Kengo Kuma ahead of 2020′s Tokyo-set games. While that design is certainly eye-catching and modern, an ill-fated concept from Tokujin Yoshioka could have perhaps one-upped the final design. Its highlight? An amazing rooftop fountain.

This isn’t just any rooftop fountain, however. Inspired by the spirit of Japanese tea rooms, the floating design stretches the entire circumference of the stadium and is even joined by a lengthy jogging path. Best of all, the fountain itself serves as a platform for the iconic Olympic torch, with the torch ultimately lighting a flame that spans the length of the fountain and juxtaposes its otherwise tranquil waters.

Take a closer look at what could have been below and look for Kengo Kuma’s own stadium to begin construction this October.