The Best BAPE Animation Collabs of 2016 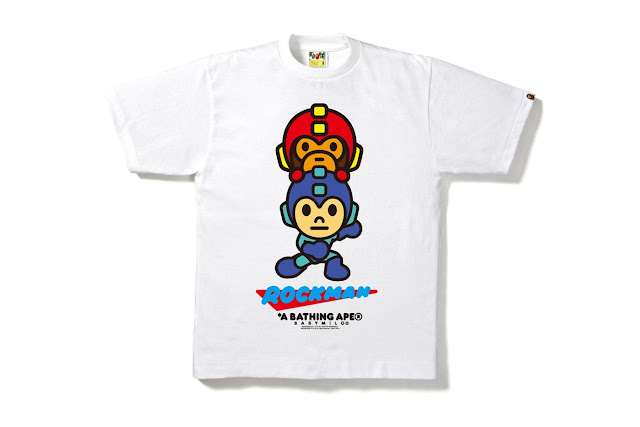 As far as collaborations go, few have accomplished such a feat in quite the same manner and flare as has BAPE. Founded by none other than Japanese streetwear stalwart NIGO, the company’s proclivity towards creative mashups likely stems from its creator’s sensitivity towards pop culture’s many genres. Most revered for his ties to the fashion world, NIGO from the jump has instilled a love for loud, eclectic designs which has now become the brands signature aesthetic. Moreover, the gifted visionary has also shown a keen interest to the culinary world, initiating such ventures as CURRY UP and 2-5 Café as well as to the hip-hop landscape having released an album in what seemed like another lifetime ago. Coming a long way from the early days of having to give away merch in order to cultivate brand awareness, BAPE has since released a breadth of cooperative ventures with other such entities sitting steady a top its respective domains. From such names as Pepsi, Coca Cola, COMME des GARÇONS, UNDERCOVER, Dover Street Market, Stüssy and UNDEFEATED to such artists as Kanye West, A$AP Ferg, Snoop Dog and Big Sean; BAPE has worked with them all.

One area in particular the Japanese-based imprint has excelled in — generating all kinds of notable buzz, is its collaborative impressions alongside some well-admired caricatures. From iconic cartoon creatures to video game personas all the way to brand mascots, BAPE boasts an impressive and ever-growing list of character collaborations, with distinct designs making its way onto tees, hoodies and accessories, amongst others. Let’s now take a look at some of the best from the past year. 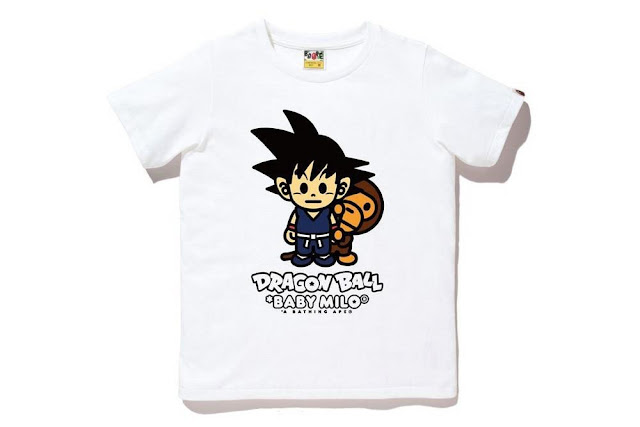 One of the most interesting BAPE mergers of the year thus far would have to be its co-branded release with the Dragon Ball franchise. Again landing on a bevy of crewneck tees, sweatshirt pullovers, hoodies and tote bags is Baby Milo starring side-by-side with some of the manga series’ main characters such as Kid Goku, Piccolo and Master Roshi. 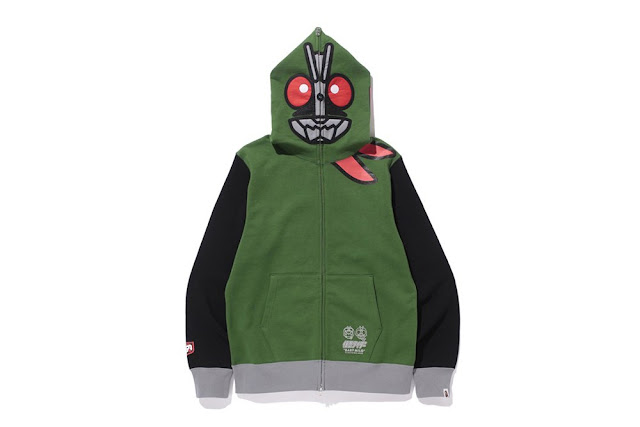 Kamen Rider or Masked Rider as so known in the U.S, is a much-loved animated metaseries based on a motorcycle-riding vigilante created from renowned manga artist Shotaro Ishinomori in the early ‘70s. Mixing it up stylistically earlier in the year alongside the likes of UNDERCOVER is this grasshopper-influenced superhero who most recently aligned with Baby Milo for a range of graphic hoodies and tees. Available in both men’s and kids’ sizes, the duo can be seen posing together with Kamen Rider’s sworn enemy Shocker also making an appearance. 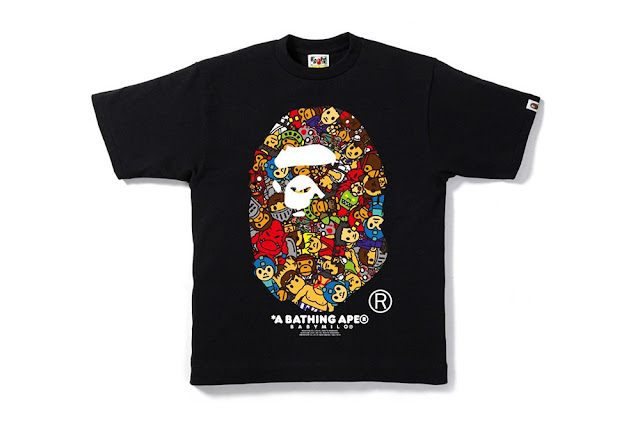 Linking up with mega video game developer and publisher Capcom, BAPE recently unveiled a small capsule paying tribute to some of the tech mogul’s most beloved classics. With sets of graphics arranged in a barrage of bold colors, we see here characters from such games as Street Fighter, Resident Evil, and Mega Man adorned in the brand’s trademark cutesy aesthetic. The range itself consists of crewneck shirts and tote bags. 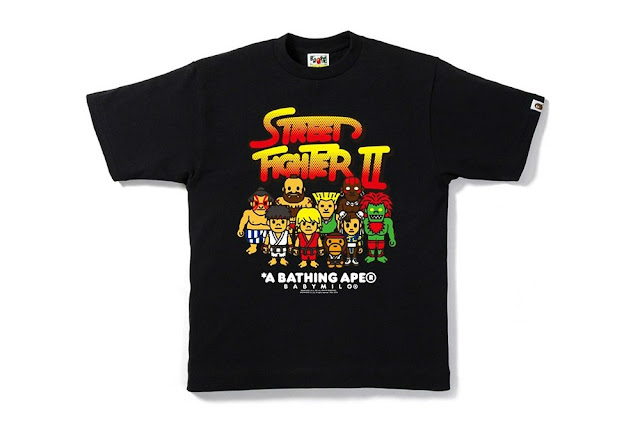 A cult classic from the early ‘90s, few need introduction to Street Fighter and the undeniable impact it once held on mainstream pop culture. Paying homage to this retro masterpiece, BAPE displayed the game’s main characters such as Ryu, Ken, Guile, Chun-Li and Blanka alongside none other than Baby Milo on an assemblage of tees. Aside from the artistic rendering of Ryu which pays tribute to the recently released Street Fighter V, check out Milo tossing some banana flames as Ryu counters with his iconic Hadoken fireballs. 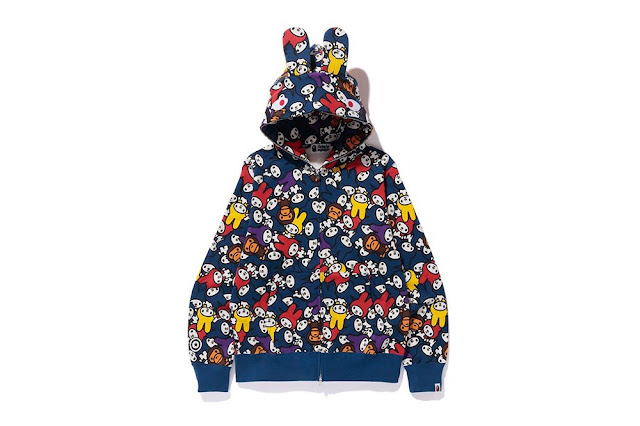 Easily mistaken for Hello Kitty, MY MELODY is another such character created from Sanrio who quickly rose to prominence following her mid ‘70s introduction. In this collection, Baby Milo and the little bunny hang out on a variety of tees and hoodies based on solid backgrounds, stripes and of course the BAPE fav camo print. Accessories too get some shine in the earring set, printed mugs and a mobile phone cleaner. 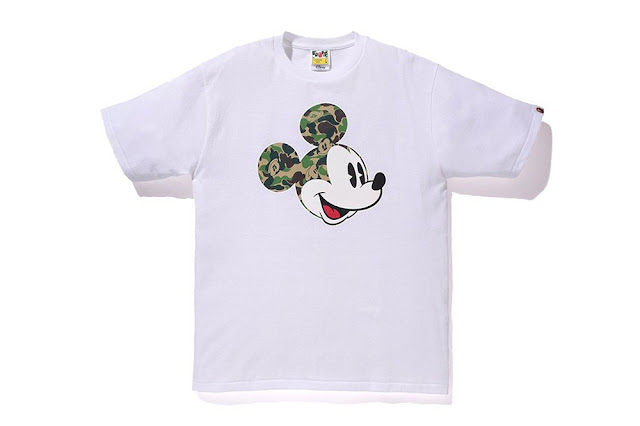 Tapping Disney for a limited run of graphic shirts resulted in this highly exclusive “Mickey Mouse” collection. In celebration of the media conglomerate’s most revered character, Mickey is seen posing on basic short-sleeved crewnecks with subtle splashes of military-inspired camo prints. Releasing earlier this summer, the range was sold exclusively at BAPE’s China, Hong Kong and Taiwan locale’s. 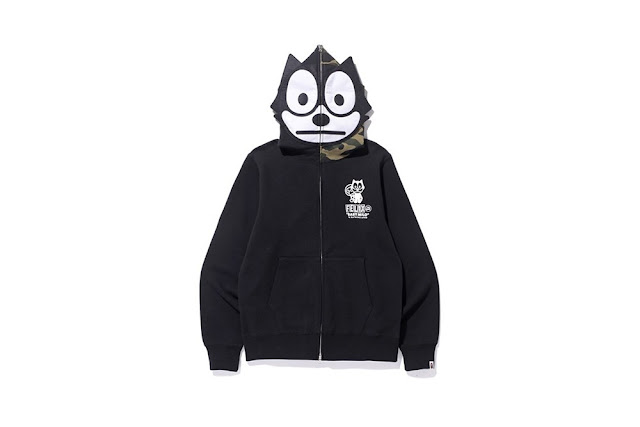 In this animated alliance, Baby Milo partners up with yet another animal friend in Felix the Cat. The beloved feline created in the early 1900’s silent film era can be seen printed, stitched and screened on a slew of military-inspired staples, namely, a field jacket, a CPO shirt and on crewneck tees adorned in camo prints. Accessories in the form of a stripped cap and pins were also on offer as was BAPE’s signature full zipped hoodie featuring a larger than life Felix face. 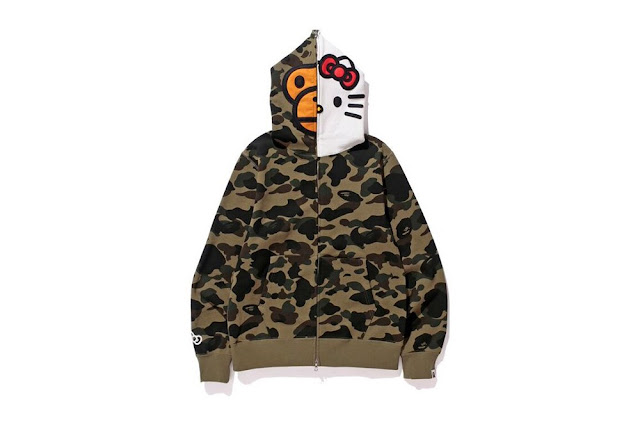 Linking up previously to celebrate the most romantic calendar date of the year, BAPE and Hello Kitty once again join forces to commemorate Valentine’s Day. Both caricatures can be found on a variety of printed tees, sweatshirts, coffee mugs, bathroom accessories and a full zipped camo hoodie highlighting the faces of both feature characters. Ideal for the whole family, pieces were offered in sizes for men, women and children. 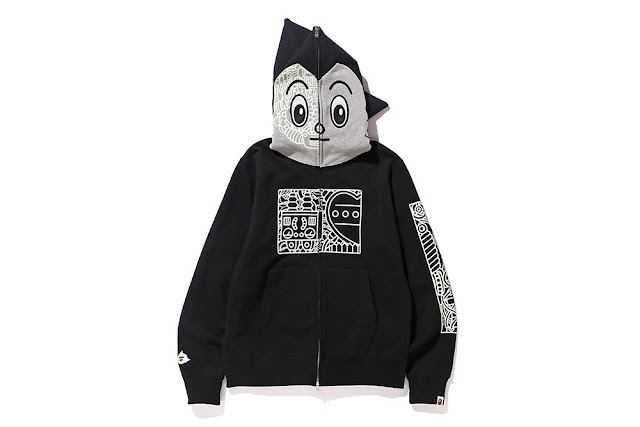 Last but definitely not least, was BAPE’s very first collaborative project of the year — its capsule collection with Japanese anime icon Astro boy. The range’s signature piece was the manga-motif hoodie featuring the heroin’s face along with glow-in-the-dark elements found on the front, back and sleeve areas. Also on tap were a line of co-branded tees.